Home Spain City of the Arts and Sciences in Valencia

City of the Arts and Sciences in Valencia

City of the Arts and Sciences in Valencia

The City of Arts and Sciences is one of Valencia’s most unique and popular tourist destinations. It lies downtown stretching over 8 kilometres long throughout the city. The outside alone is enough to get you talking having been built along the old Tuira riverbed (which was drained and redirected after a devastating flood in 1957). It resembles something out of a futuristic film with huge stretched domes interspersed with glass and water.

The architects responsible are the admired Santiago Calatrava and Felix Candela who designed the buildings and oversaw construction which began in July 1996. The City took two years to complete and was inaugurated in April 1998, however it wasn’t until October 2005 that the last magnificent component of the City (El Palau de les Arts Renia Sofia) was opened. The main elements that make up the City are the Hermisferic (an IMAX cinema), the Umbracle (a walkway, vantage point and host to car parking facilities) the Principe Felipe Science Museum (a science museum), the Oceanografico (the largest aquarium in Europe) and the Paula de les Arts Renia Sofia (which hosts musical and operatic performances), and of course not forgetting the Agora. The striking architecture of these buildings and the complexity of their making are reflected in their breath-taking beauty. The overall effect is one of iridescent magnificence, reminiscent of the shimmering Mediterranean sea.

The complex plays host to a huge range of activities to suit all tastes and ages uniting various aspects of nature, technology, art and science and bringing together tradition and innovation with a diverse artistic and cultural history, as well as rural tourism and nature. Its programme of events is quite extraordinary and you can guarantee that whatever time of year you visit, there will always be a wealth of activities, tours, and performances to stimulate you, your friends and family.

L’Hemisfèric is around 13,000 m² and contains an IMAX cinema where you can watch amazing 3D films, a huge planetarium where you can learn about the stars and planets, and a Laserium. This building sits at the centre of the City and is meant to look like a giant eye watching over everything, with an eyelid that opens to access the water pool that surrounds it. The pool has a glass bottom which reflects the building back creating the impression that the ‘eye’ is whole. The pupil of the eye is the great Ominax theatre.

El Museu de les Ciències Príncipe Felipe is the science museum which is set over three floors and is around 40,000 m². On the ground floor you will find a basketball court which is sponsored by a local team. The first floor gives way to an incredible view of the Turia Garden and the second floor is home to the Legacy of Science exhibition where notable researchers Santiago Ramón y Cajal, Severo Ochoa y, and Jean Dausset share their findings and knowledge. Finally on the uppermost floor you will discover the ”Chromosome Forest” which explores the wonders of human DNA, as well as other exhibitions such as “Zero Gravity” and the “Space Academy”.

El Museu de les Ciències Príncipe FelipeL’Umbracle —this is a beautifully designed landscaped promenade which is a treat for all the senses. You can stop to admire the stunning plant species that grow along the pathway such as lavender, honeysuckle, lotus flowers, palm trees and rockrose. In this area you can also peruse an outdoor art gallery with wonderful and often bizarre sculptures made by contemporary artists. The garden is lovingly looked after with plant species picked to change colour with the seasons.

L’Umbracle L’Oceanogràfic — an open-air oceanographic park. This is the largest in Europe stretching over a massive 110,000 m² and holding over 42 million litres of water. The building itself is in the shape of a water lily and is home to over 500 species of marine and animal life including dolphins, sting rays, penguins, sharks, seals and turtles, as well as hundreds of species of fish and wetland bird species. 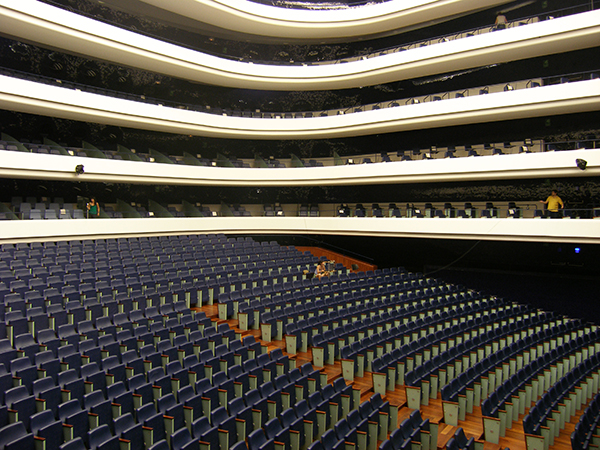 El Palau de les Arts Reina Sofia is the hub of the performing arts that take place in the City. Inside the building is divided into four rooms, each dedicated to a different type of musical or artistic spectacle. Here you can come to see the opera, watch a play or listen to an impressive musical performance. Outside the building is a picturesque walking area and huge pools of water.

L’Àgora is an additional space that takes the form of a covered plaza. It was created to hold various events, exhibitions, conventions, performances and sports meetings. The building has played host to many significant events since its construction, including the Christmas Special Program and the Freestyle Burn Spanish Cup, where motorcyclists performed death-defying stunts on their motorbikes.

The City of Arts and Sciences is a truly special place to visit, there is so much to see and do here that one day of your holiday simply might not be enough to explore it all properly. It is one of Spain’s most famous tourist attractions and definitely a must see place to visit.

The City of Arts and Sciences in Valencia is one of the most popular tourist attractions in the country. Built over a decade ago the City is made up of cleverly designed buildings which combine the beauty of nature and art and the inspiration of science and technology. Here you will find an amazing science museum, an IMAX cinema, beautiful landscaped gardens filled with sculptures, plants and scented flowers, a planetarium, theatres and auditoriums where fantastic musical and dramatic performances are held, and of course not forgetting Europe’s largest aquarium. There is so much to do and see here you will be entertained for hours. It inspires and entertains and is a destination definitely worth visiting.